by Steven G (subscribe)
Too much tertiary education... Former performer/wrestler, teacher, scientist; Published author & Father... Want to be a writer if I grow up...
Published November 30th 2021
One of the best rock albums of 2021
Now, this is something odd. Deep Purple released their last album Whoosh! last year and I thought it was a really strong collection. But this being Deep Purple, you don't expect another album for another couple of years. Their turnaround of late has been steady but not bang! bang! bang! album after album.

So, when my classic rock music newsfeed told me that a new album had been released by the band, I had to go and check to make sure there was no mistake. More than that  this is A COVERS ALBUM!

I admit, I was tentative with this. So tentative that instead of waiting for another three or four weeks for the shop to get in a physical copy, I went onto Amazon (US) and bought the digital download.

I'm going to get the physical copy.

This is amazing. I really enjoyed the last album; this is better. They have taken these songs  a couple of which I hadn't heard of before  and made them into Purple songs. And the mixing on this album is so much better than last time, with none of the instruments pushed to the fore unless they need to be.

So, let's look at the tracks.

'7 And 7 Is' Originally by Love, this is one of the songs I hadn't heard before. Pushed along by some powerhouse drumming, with a guitar and keyboard solo added to the mix, this is a fantastic way to open an album.

'Rockin' Pneumonia And The Boogie Woogie Flu' They take the old Piano Smith early blues track and just go for broke, with some cool piano playing and a guitar solo. The song just has the feel of a sense of fun.

'Oh Well' The blues of Fleetwood Mac's original has been Deep Purple-ified while still remaining faithful to its source. The guitar work here is amazing. A real highlight of the album.

'Jenny Take A Ride!' I only recently managed to find a decent Mitch Ryder greatest hits collection, so the original of this song has been in my head, but here it's done in a harder style, with the drums again driving things along like a train rushing down the tracks and the organ and guitar right there. And then that piano hits and it's solo time for everyone! Just amazing.

'Watching The River Flow' A Bob Dylan cover this time (is it a rule that all covers albums have to have a Dylan song on them?), a song I'm only lukewarm on. But Deep Purple have changed that. Their version does surpass the original, with the tight musicianship and Ian Gillan's voice smooth and this is so good.

'Let The Good Times Roll' I had to look up who did this song originally (Louis Jordan), as I reckon I've only ever heard cover versions. And this is a change of pace. We go all brass instruments here with a very laid-back guitar and standard Purple organ. A nice change of pace and change of style.

'Dixie Chicken' It's good to see music by Little Feat getting some love. Deep Purple keep that New Orleans jazzy feel even while rocking the song up a fraction. This song is a slower tempo which I think the album needed at this point.

'Shapes Of Things' Now the Yardbirds get a look in. A pretty straightforward cover, with heavier drumming, until the guitar solo which Steve Morse makes his own, and then an organ solo because of course.

'The Battle Of New Orleans' Another song I've only heard covers of, and had to look up the original  Jimmy Driftwood. Deep Purple tackle this in a more traditional manner, and it has yet another different feel and style and it sounds like they had fun recording it. It just has that feel about it.

'Lucifer' This is the other song I hadn't heard of before. The original is by Bob Seger, so there's another track I'm going to have to hunt down. As it is, this is a great rock song that Deep Purple play with such assurance you'd think it was an original.


'White Room' The Cream classic, and one of my personal favourite songs. With the exception of the keyboards, they do a very straightforward cover, and that is fine. Is it as good as the original? No. Is it a good version? Best cover of this song I've heard (and I have heard many). Morse doesn't try to ape Clapton's solo, but does his own, and I think that is important here and helps lift this above other covers of this track.

'Caught In The Act' And we finish with a medley. I had to look up what the songs are: 'Going Down' (Jeff Beck Group), ' Green Onions' (Booker T. & the MGs), ' Hot 'Lanta' (The Allman Brothers Band), ' Dazed And Confused' (Led Zeppelin) and 'Gimme Some Lovin'' (The Spencer Davis Group). It is mainly instrumental and it runs for almost 8 minutes and it is glorious. I can imagine this live and the crowd just getting into it. This is such an amazing way to finish this album.

I think this might be one of the best covers albums I have come across. There is not a bad track on this set. Not even an "it was okay" track. This version of the band  I believe we're up to Mark VIII now  is, in my opinion, the best since their Mark II heyday.

As if you couldn't have guessed  highest recommendation and a late runner for my album of the year. 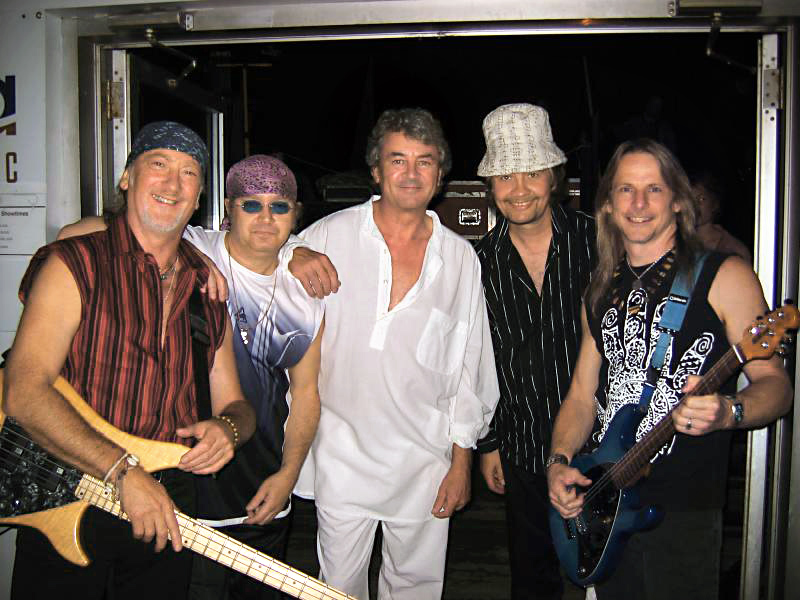